Outcomes allow the administration and faculty to track mastery in a course. Users can import Account, State, and Common Core Standards into an account and course. 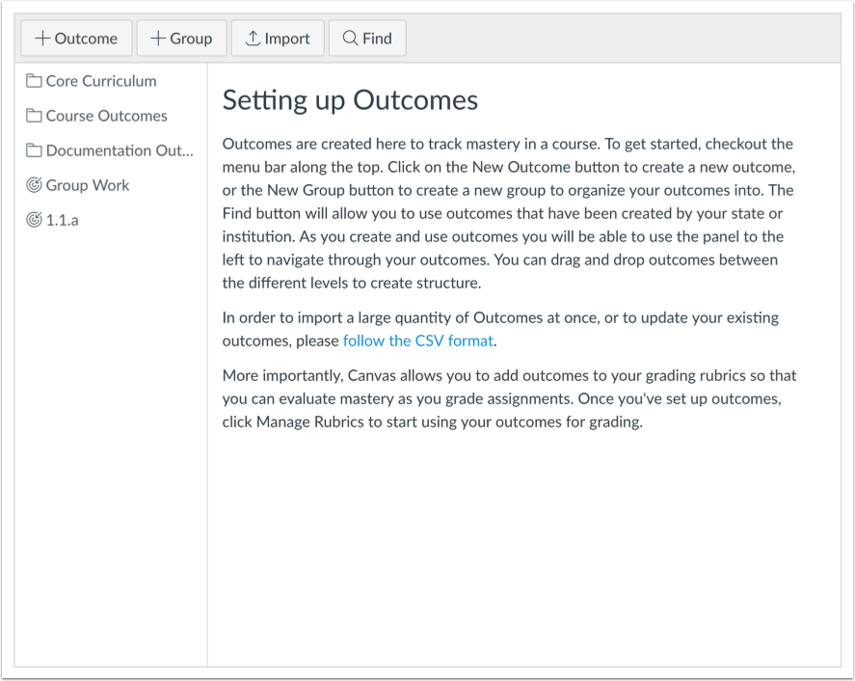 Outcomes enables the administration and faculty to track students’ progress as measured by pedagogical goals or desired outcomes.

Assessments created to test student knowledge or to require students to demonstrate a specific skill resulting from a learning activity can be aligned to learning outcomes using rubrics (which can be used for grading simultaneously).

Grading student work automatically collects and compiles data on student progress for the Outcomes. The data is available for reporting to support teaching improvement, identify at-risk students, and support the accreditation process. This unified, streamlined approach dramatically reduces the amount of work required to implement Learning Outcomes through the intelligent reuse of assessment workflows in the grading process.﻿

When would I use Outcomes? 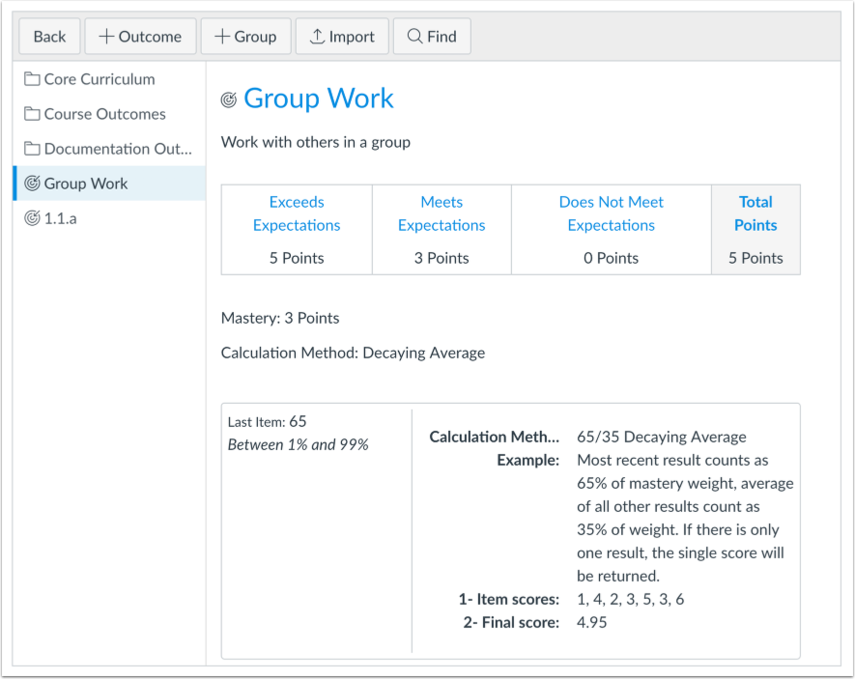 When users create an outcome, users can set one of four calculation methods used for student mastery: Decaying Average, n Number of Times, Most Recent Score, and Highest Score. Calculation methods are used in conjunction within the Learning Mastery Gradebook. 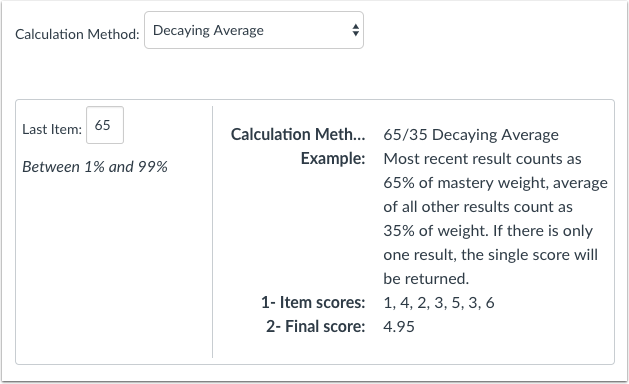 The Decaying Average calculation factors the average of all assessment items while weighing the most recent (current) submission to any assignment associated with this outcome at a higher percentage.

By default, the Canvas decaying average is set at 65/35, meaning the current item is weighted at 65%, and the average of all other user scores is weighted at 35%. However, users can specify between 1% and 99% for the current percentage, and prior scores are weighted against the percentage difference. Note that the average is rounded to the next two decimals. If there is only one result, then the single score will be displayed.

For example, a student has four aligned items with scores of 4, 3, 2, and 5 (scores listed chronologically from oldest to most recent). If the current item is set to be weighted at 65% of mastery, prior scores are weighted at 35%: 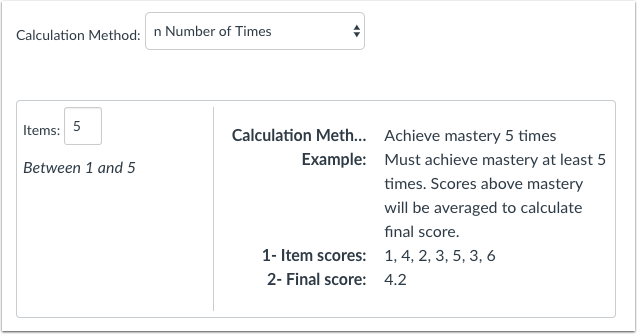 The n Number of Times calculation requires a specific number of times that mastery must be met or exceeded, and the number of aligned items that must be completed for calculation eligibility. Any scores that do not meet mastery are not part of the calculation.

Users can specify between 1 and 5 items required for mastery.

The Most Recent Score calculation always selects the score for the most recent assessment item.

The Highest Score calculation always selects the highest score for all assessment items. 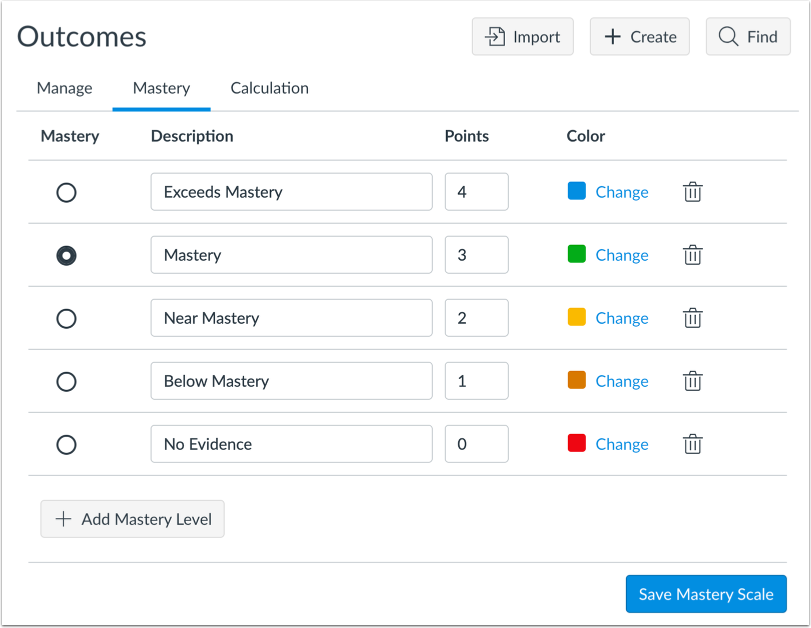 Learn more about mastery scales in an account or in a course. 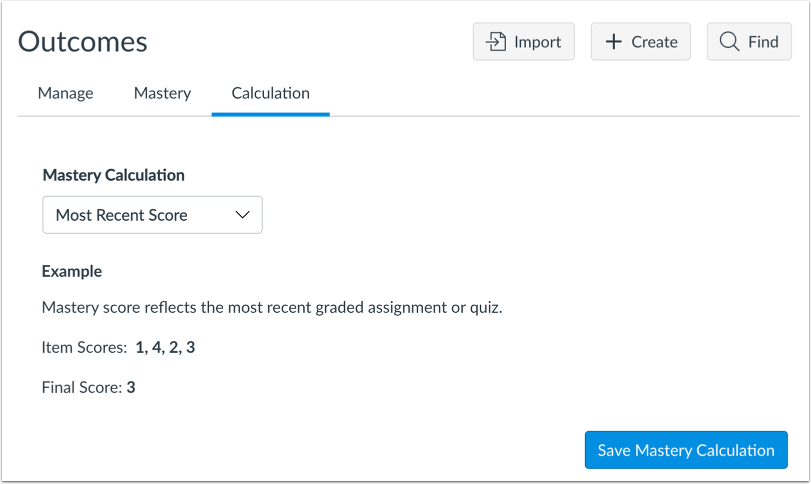 Learn more about mastery calculations in an account or in a course. 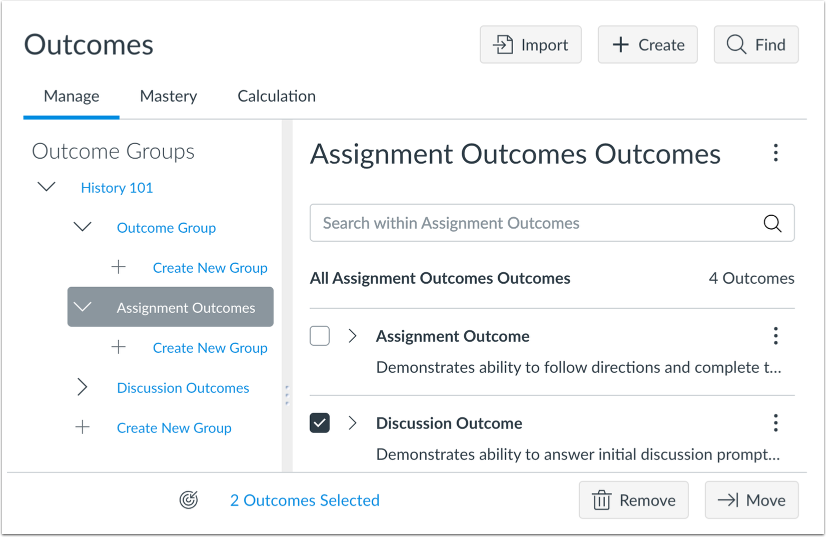 If the Account and Course Level Outcome Mastery Scales feature preview and the Improved Outcomes Management feature preview are enabled for your account, the Outcomes page displays an improved interface for viewing and managing outcomes.

Learn more about the Improved Outcomes Management in an account or in a course.