What do I need to know about creating a script to automatically import SIS data to a Canvas account?

When creating an automated data integration with Canvas, you need to create a script to automatically import data to Canvas. An SIS script automatically synchronizes the users in your institution with your Canvas account. This lesson presents programming languages and other considerations when creating a script file.

Due to a tremendous amount of variables that exist among each institution, Canvas does not officially support or promote the use of any specific scripting language or script that users can import data to Canvas, such as: 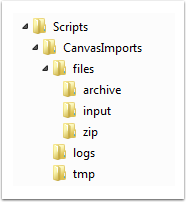 On the server or computer that will run the import process (Windows/Linux/Mac), you'll need to create a folder structure to store your import applications (script, logs, active files, etc).

A simple example of an SIS script is to create a script that runs at specific times and checks a directory in your folder scructure to see if there are files that need to be sent to Canvas. If there are files, the script could compress them into a .zip file and send them to Canvas. View the SIS script flowchart.

When creating a script, you should consider potential problems such as:

The Canvas Community has provided a GitHub repository of sample scripts that address many script considerations. Even with very simple tools, these examples show how to implement a basic automated import script.

Note: Each sample GitHub script will have its own requirements and additional components that may need to be installed for proper functionality.

By using the tools that are presented in these tutorials, you should now be better prepared to create your own automated import tool. If you run into challenges, please visit our migration and integration community forum. You may find other people there who can help with comments and suggestions on your script.