How do I view campaign results in the Impact Dashboard?

You can access statistics related to how campaign messages and articles are being viewed and how tool usage among the campaign audience is impacted by your efforts. 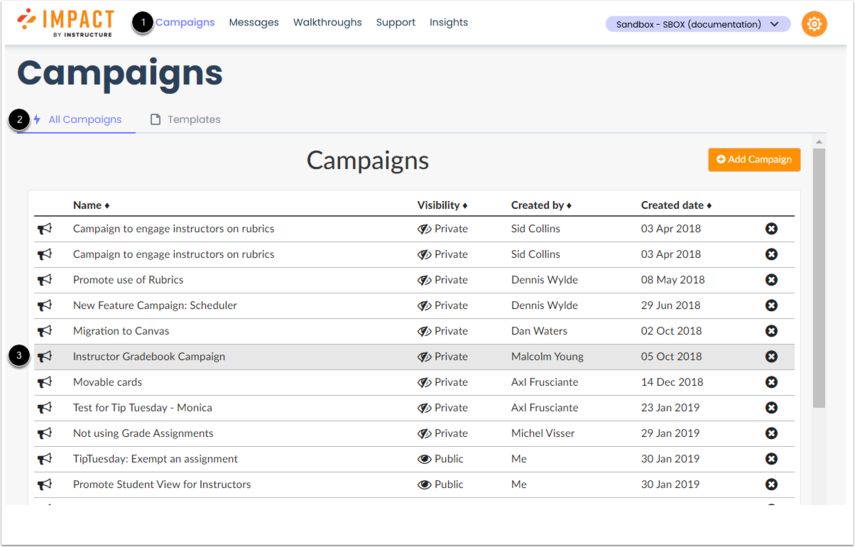 In the All Campaigns tab [2], click the campaign you wish to analyze [3]. 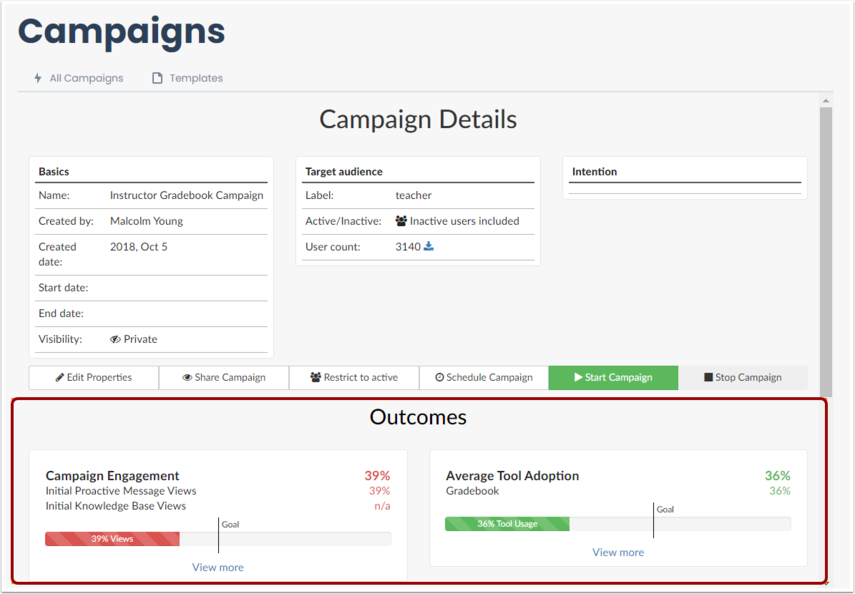 Scroll down to the Outcomes section. 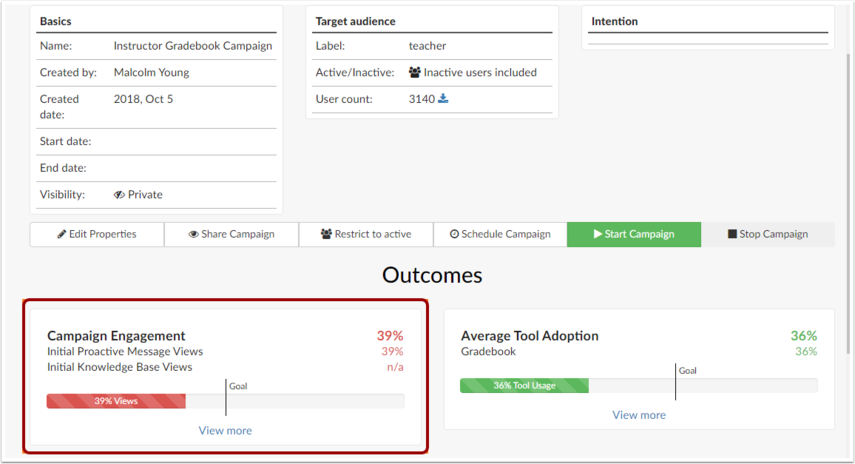 Hover over the percentage for campaign engagement, proactive message views, or knowledge base views to see how the calculation was made (number of items viewed by each unique user/potential audience X number of items). 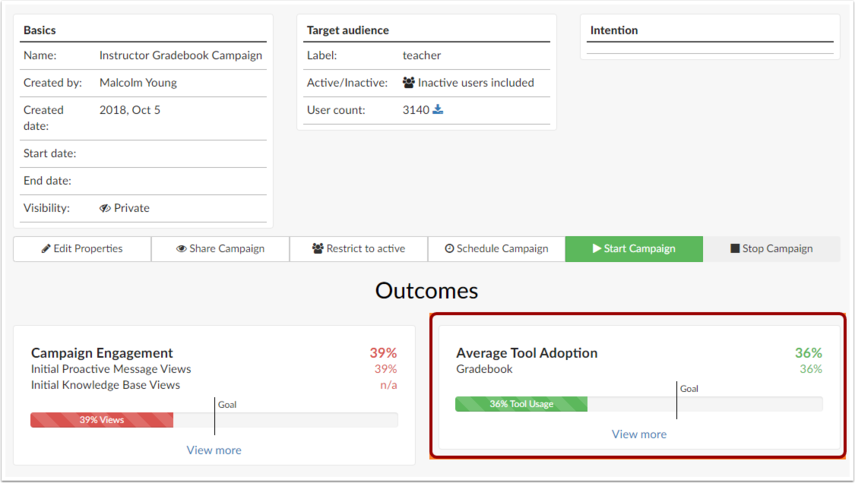 The Goal indicator represents the percentage goal set in the campaign properties.

In the Campaign Engagement section, click the view more link to view message and article statistics in more detail. 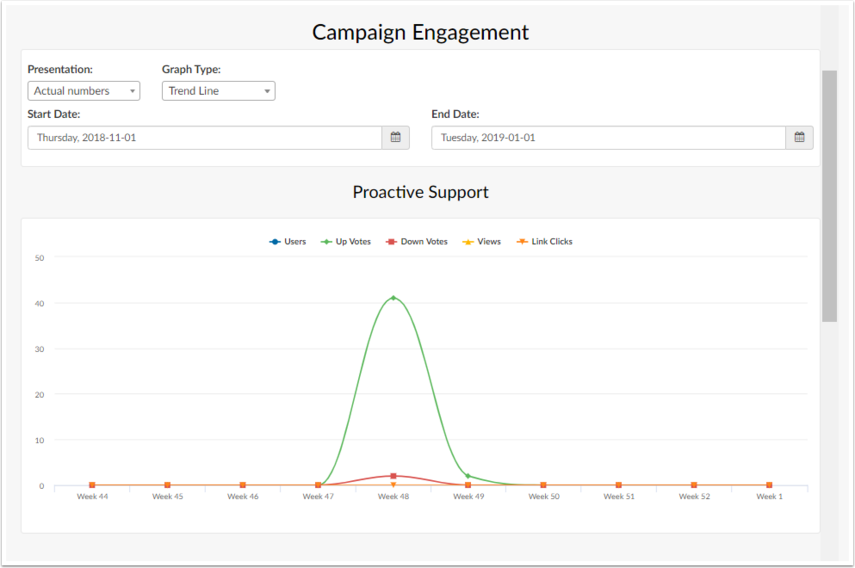 The Campaign Engagement page contains a chart and table showing how heavily the campaign audience is engaging with the assigned messages (in the Proactive Support section) and support articles (in the Knowledge Base section).

The table underneath each chart has a row for each individual content item with columns for the number of users who viewed the item, total views, up- and down-votes, comments, and link clicks. 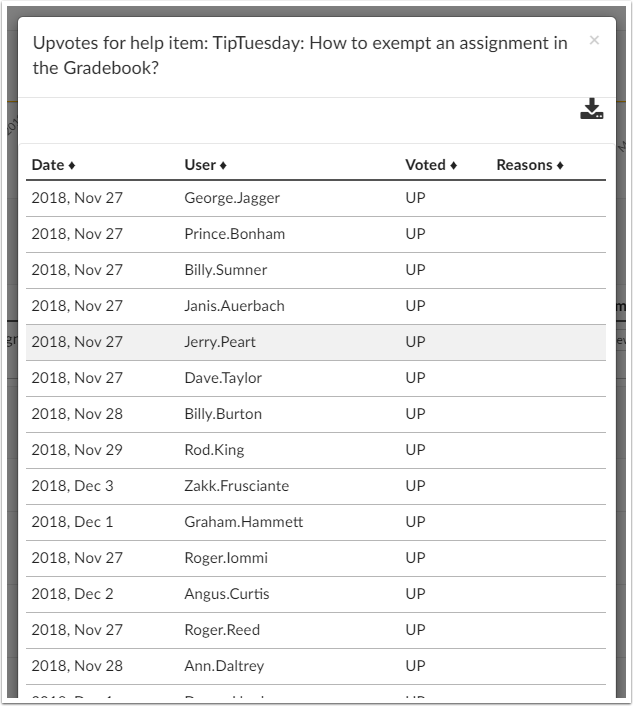 Click the View button next to the number of votes and comments on an individual item to see when and by whom each vote and comment has been issued. 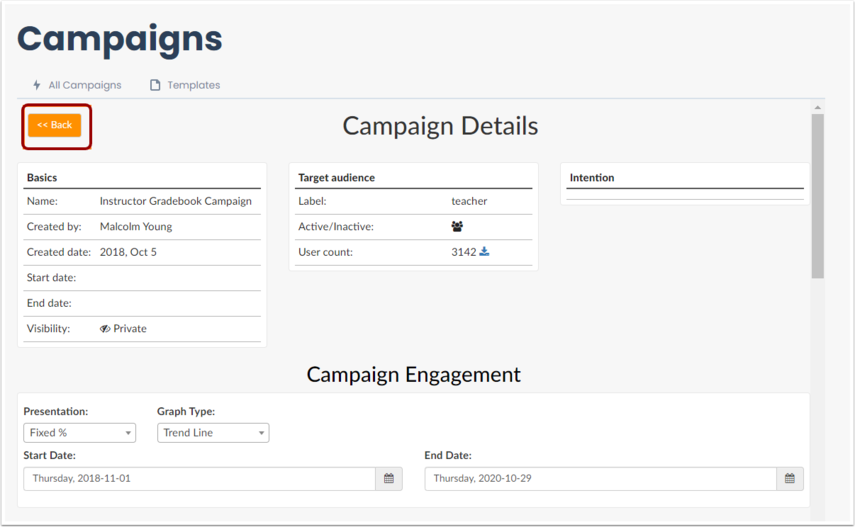 You can export the contents of the overview as a CSV-file by clicking the download icon.

In the Average Tool Adoption section, click the view more link to view message and article statistics in more detail. 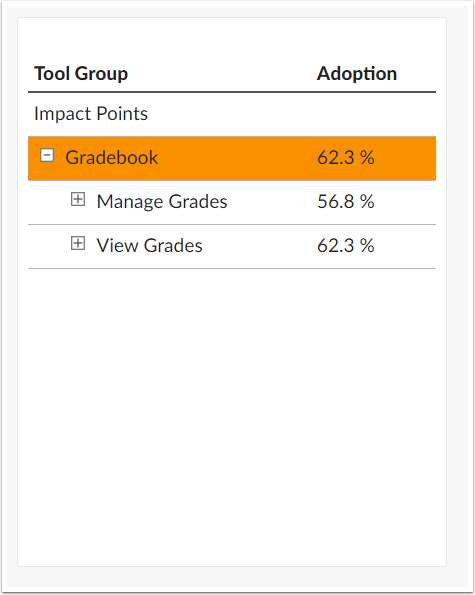 The Campaign Tool Adoption page contains a chart and table presenting the campaign audience’s activity level within the monitor categories assigned to the campaign. This allows you to measure the impact of the communication you perform through Impact messaging and support articles and other means on tool adoption. 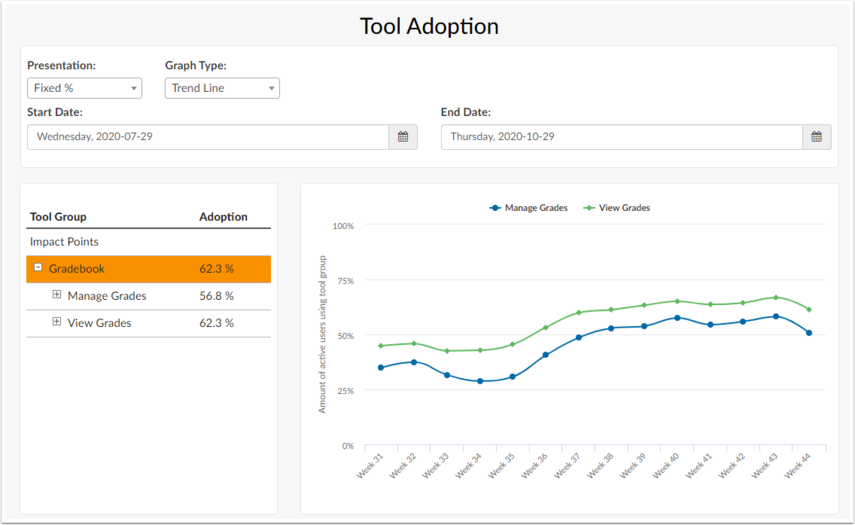 The adoption level is calculated based on the unique campaign users that have logged in to the learning application over the selected time period and how many of them have triggered at least one monitor that lives underneath each monitor category or one of its child categories.

In the above example 1830 campaign users have logged into the system over the selected period. Across the sub-categories that live under the Gradebook monitor category, 1141 unique users have triggered at least one of the underlying monitors. This means that the adoption level for Gradebook is 62.3%.

In the chart, the adoption level is calculated for each unit of time, based on the number of active users within that timespan.

You can adjust the visualization in both the Campaign Engagement and Tool Adoption sections using the filters and presentation in the global filter bar. 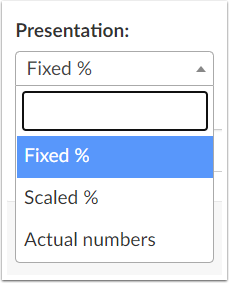 This setting determines how the chart data is scaled and whether the adoption level, views, votes, or clicks are expressed as a percentage of the campaign audience or an absolute number.

Fixed % (default) presents the percentage of users assigned to the campaign who used the monitor category (Tool Adoption page) or viewed, voted on, and clicked any of the campaign items (Campaign Engagement page) with the Y-axis of the chart ranging from 0% to 100%. Scaled % shows the same metric as Fixed %, but narrows the Y-axis of the chart in order to focus on the statistics shown.

The Actual numbers option changes the metric shown in the chart from a percentage of campaign users to an absolute number of unique users who used the monitor category (Tool Adoption page) or the absolute number of views, votes, and link clicks on the campaign items (Campaign Engagement page). 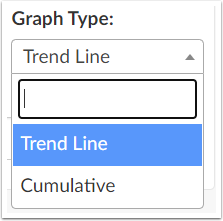 This option allows you to toggle between two chart presentation styles.

With Trend Line enabled, the charts show separate adoption levels (Tool Adoption page), views, votes, and clicks (Campaign Engagement page) for each unit of time. When set to the Cumulative Graph Type, the chart presents the growth curve from the first unit of time to the last unit of time. Each point in the graph shows the total adoption, views, votes, and clicks from the start date of the chart until the date associated with that point.

These filters allow you to filter the adoption data (Tool Adoption page) views, votes, and clicks (Campaign Engagement page) based on a specific date range. By default, the date range is set to a Start Date of three months before the current date or one month before the earliest campaign event and an End Date of today. The selected date range also determines which unit of time is presented on the X-axis of the chart.

Learn more about campaign events in How do I add events to a campaign?